The Choir and Orchestra of The King’s Consort, conducted by Robert King, have the honour of opening the Festival de La Chaise-Dieu with Mendelssohn's rewriting of Handel's oratorio Israel in Egypt (Israel in Ägypten) with soloists Soraya Mafi, soprano, Claudia Huckle, alto, Benjamin Hulett, tenor and Matthew Brook, bass.

That historic performance has itself now been painstakingly reconstructed from fragments and sources across Europe: and radically different it is to Handel’s 1739 score. The large and colourful orchestra play nineteenth-century instruments, producing vivid new sonorities, and including very different orchestrations. With no organ at his performance, Mendelssohn scored the continuo part into the orchestra, making especial use of a pair of clarinets. He also added a series of recitatives, accompanied by the delicious combination of two solo cellos and a double bass. There are significant changes to the order of movements, as well as new numbers. The text is sung in German, and the work starts with a thrilling, pure-Mendelssohn overture, which mixes life and energy with moments of exquisitely shifting instrumental colours. 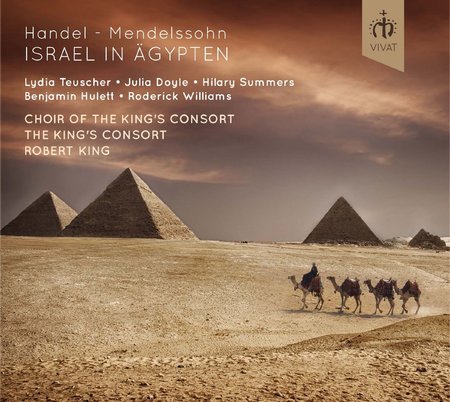