With an unsurpassed reputation for inspiring performances of baroque and classical music, The English Concert ranks among the finest chamber orchestras in the world. Such standing is the result of tireless work at home, on the road and in the studio since 1973, guided along the way by founder Trevor Pinnock, his successor Andrew Manze, and current Artistic Director Harry Bicket. Our award-winning discography of over 100 recordings features masterworks from Bach to Purcell and Handel to Mozart, as well as some of the most renowned artists in recent history. Lucy Crowe’s début solo recital Il Caro Sassone, Alison Balsom’s Sound the Trumpet, and Elizabeth Watts’ recent exploration of virtuosic arias by Alessandro Scarlatti are but the latest of our endeavours.

Ground-breaking collaborations in musical theatre and opera are also at the forefront of our thinking and form part of our longstanding relationships with exceptional artists and venues. From the Buxton Festival or the Elizabethan settings of Shakespeare’s Globe and the Sam Wanamaker Playhouse to challenging perceptions of gender through the music of Handel, we fearlessly step outside of the traditional concert hall to reach new audiences. This season sees Handel’s much-loved Messiah brought to life on stage at the Bristol Old Vic through director Tom Morris’s dramatic vision whilst the musical treasures of Jewish communities are put on show at the Wigmore Hall next summer. The new season is also profoundly influenced by literature as we celebrate the 400th anniversary of the deaths of both William Shakespeare and Miguel Cervantes. The adventures of the misguided hero Don Quixote are recounted through the music of Purcell and Telemann, while musical representations of the Bard’s A Midsummer Night’s Dream and Giulio Cesare set sail on a tour to the Far East. Completing the round-the-world trip, our series of Handel operas-in-concert, commissioned by New York’s Carnegie Hall, continues to flourish after the success of Radamisto (Daniels, Pisaroni, Rae) in 2013. Theodora (Röschmann, Connolly, Streit) and Alcina (DiDonato, Coote, Rice) soon followed in 2014 with Hercules (Rose, Coote, Watts) and Orlando (Davies, Sampson, Cooke) hot on their heels in 2015 and 2016. The present season sees the much-anticipated return of the ever-effervescent Joyce DiDonato in the title role of Ariodante alongside an all-star cast.

"Under Bicket’s skilled direction, the players of The English Concert made delectable sounds in bringing this intricate score – full of ingenuity and charm – back to life." The Guardian, 2015

"Here given new life with the invigorating English Concert, skittering firework displays alternate with soulful contemplations in a programme full of surprises." The Independent, 2015

Internationally renowned as an opera and concert conductor of distinction, Harry Bicket is especially noted for his interpretation of baroque and classical repertoire and in 2007 became Artistic Director of The English Concert, one of the UK’s finest period orchestras. He became Chief Conductor of Santa Fe Opera in 2013 and opened the 2014 season with a critically-acclaimed Fidelio. Born in Liverpool, he studied at the Royal College of Music and Oxford University and is an accomplished harpsichordist.

Plans for the 2016/17 season include his first Carmen with Lyric Opera of Chicago and Alcina with Santa Fe Opera. Symphonic work includes visits to Cleveland Orchestra including Rameau’s Suite from Les Boréades, and a visit to the Cincinnati May Festival with Bach’s B Minor Mass. Plans with The English Concert include UK and international touring within Europe, United States (Handel’s Ariodante featuring Joyce DiDonato, including Carnegie Hall) and the Far East (Shanghai, Beijing, Wuhan and Hong Kong).

He made his Glyndebourne Festival debut in 1996 with Peter Sellars’ landmark production of Theodora and returned in 1999 and 2003. In 2004 his first Metropolitan Opera production (an acclaimed new production of Rodelinda with Renée Fleming and David Daniels) was quickly followed by Cesare (2006/7) and Clemenza di Tito (2008) and he is now a regular guest. He made his debut with the Bayerische Staatsoper in 2000 (Rinaldo, new production) and over the following seven years conducted many performances including Ariodante, Serse, Orlando, Orfee, Barbieri, Entführung and Zauberflöte.

In 2001 his first Barcelona production, Giulio Cesare, earned him the Opera Critics’ Prize for best conductor. He has since returned for Midsummer Night’s Dream (2005), Ariodante (2006), L’Arbore di Diana (2009) and Agrippina (2013). In 2003 his debut production for the Royal Opera House, Covent Garden (Handel’s Orlando) received an Olivier Award nomination for Best New Opera Production. In the same year he conducted Lyric Opera of Chicago for the first time and has since returned regularly.

Recordings to date with The English Concert include releases for Virgin Classics, Chandos and Harmonia Mundi featuring Elizabeth Watts, David Daniels, Lucy Crowe, Sarah Connolly and Rosemary Joshua. Bicket’s discography also includes five recordings with the Orchestra of the Age of Enlightenment, including a collection of Handel opera arias with Renée Fleming (Decca) and Ian Bostridge (EMI), as well as selections from Handel’s Theodora, Serse, and the cantata La Lucrezia with Lorraine Hunt Lieberson (Avie), which was nominated for a Grammy Award. His Gramophone Award-nominated CDs also include Sento Amor with David Daniels featuring arias by Gluck, Handel and Mozart (Virgin Veritas) and Il tenero momento with Susan Graham featuring arias by Mozart and Gluck (Erato).

Programme proposals and periods of availability are visible on the French page of the The English Concert on our website via this link. 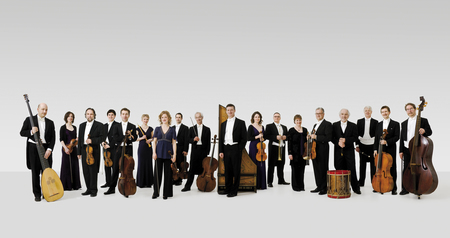 The English Concert on: